Since Maya started to have some greeting issues, I have been trying to find better ways to socialize her with other dogs. Lucky, another Shiba Inu owner recommended a daycare that "gets" Shibas and Maya was able to pass their evaluation last September. After a few months of struggle with her health issues, she's finally out of the cone, got her new "quick release" collar, took the required Bordetella vaccine, and was ready for her first day of school in mid-December. 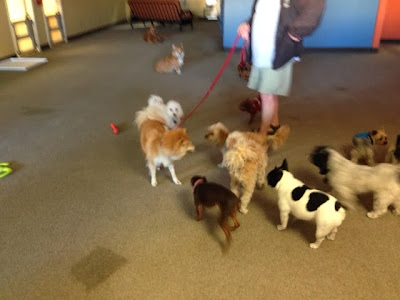 When we arrived at the daycare, the owner/trainer walked her into the room while I watched over the counter. She growled a little at the dogs that came close to her, but didn't snap or lunge. The trainer took her leash off, and after peeing on the carpet (how embarrassing) she sort of settled in.


That evening, Maya's daddy went to pick her up and was greeted by a different trainer. When he asked how Maya did, she gave him a long sigh and a big head shake. She said Maya basically growled at every dog coming close to her, got angry when any other dog received a treat, and even got mad when she accidentally walked into another dog herself... Uhh!

Being super concerned, I wrote to the owner to ask for more information the next day, and got the response:

"Maya does not like dogs brushing next to her, so she will show teeth and growl. She tends to go after dogs who sniff her as well. She did not play with dogs but she also was not in a corner. Maya laid around with the group as a typical Sheba would.

I am willing to have her keep coming in for half days for her to be more comfortable and you as well. She does needs to be socialized more, I believe."

Well, at least she's not expelled. 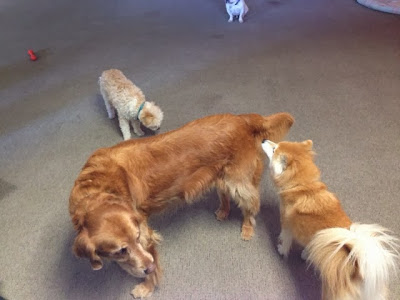 Two days later, I took her to the daycare again. At the end of the day when I picked her up, I got some surprising good news. I was told that she only growled at one dog throughout the day and "he probably deserves it". Whew... Since then, we continued to take her there for half day (6 hours) daycare once a week and heard nothing but positive comments. Earlier this month, she even stayed there for a full week while we traveled to Asia.

In the past few months, we stopped going to dog parks, not only because she would just wonder around looking bored, but would also tend to get itchy afterwards. At daycare, she still just wonders around and doesn't really "play" that much, but at least we don't need bore ourselves out watching, and since it's indoors, no worries about worsening her allergies (the wounds on her face actually all healed up nicely during her one week stay). I don't really care if she "plays" with the other dogs or not, I am satisfied as long as she's comfortable in the environment. After a few trips, she actually did find a few dogs she likes to play with.

All in all, I am really glad we found a place where she can safely interact with other dogs and someone to look after her while we travel. And of course, a tired out pup at the end of the day is always a bonus.