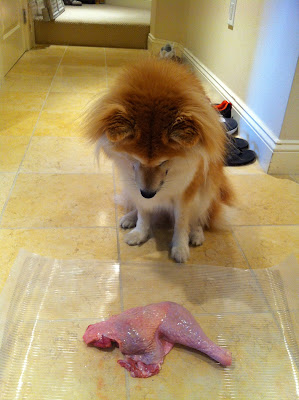 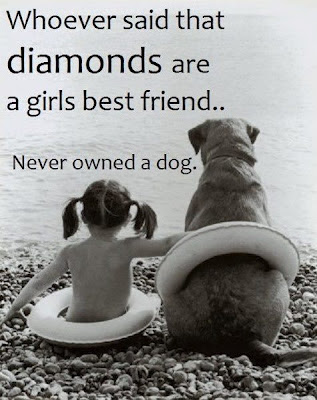 at 9:32 PM No comments:
Email ThisBlogThis!Share to TwitterShare to FacebookShare to Pinterest
Labels: Birthday, Love

I usually mix all the powdery supplements I feed Maya once a week, so I don't have open up so many bottles everyday. After mixing the powder, I would use a spoon to measure the total amount and divide it up for each meal. Sometimes I ended up with some tricky math problems, like "how to divide 18 tsp into 14 meals". I had found some creative ways to deal with it, such as using different size spoons, but I still often end up with uneven amount of powder for the last few meals of the week. It's not really a big deal, but just bothers me.

Today, I found a perfect solution! I can just add her THK dehydrated raw to make up the missing amount to the next dividable number. For example, adding 3 tsp to the 18 tsp of supplements, and now I can give her exactly 1.5 tsp per meal. Since it's only a small amount and I've already been sprinkling it on top of her meals, it won't make any changes to her diet. Why haven't I thought about this sooner?

at 1:50 AM No comments:
Email ThisBlogThis!Share to TwitterShare to FacebookShare to Pinterest
Labels: Murmur, Supplements

She seems to itch less in the past few days, but it only takes one scratch to keep the wounds from healing. The e-collar is out... 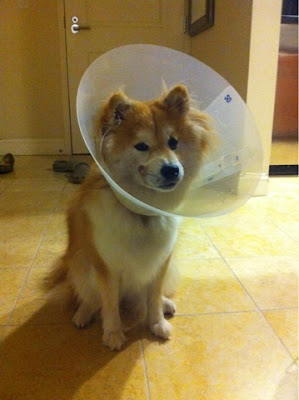 at 10:50 PM No comments:
Email ThisBlogThis!Share to TwitterShare to FacebookShare to Pinterest
Labels: Allergies

There are two raw co-op groups in the Bay Area, SFRaw and Fremont BARF Co-op. Because Fremont is across the toll bridge from us, I kind of only paid attention to SFRaw. However, they require a annual fee for members, which is a bit high for us since Maya doesn't need that much food, so I haven't joined them. They do have a freezer sale every week, but because I hate driving into San Francisco and they charge 15% more for non-members, I only been there twice.

For whatever reason, a few weeks ago I decided to check out Fremont BARF Co-op, and to my surprise I found out they actually have a pick up location close to where we live. I placed an order last month, which was scheduled to be picked up this past Thursday.

On Wednesday, the organizer sent out an email calling for volunteers to help on the pick-up day. Since I have some free time, I went to help out. It was a bit chaotic, but basically two full hours of moving, sorting and labeling meat. Here's a picture I snapped, which only shows about one third of the meat at the pick-up site. 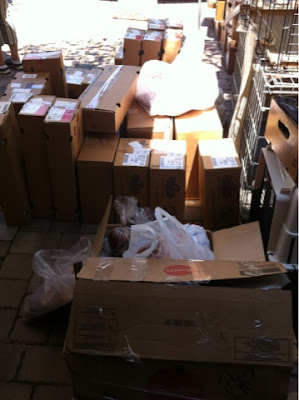 Unfortunately, the venders were out of stock on some stuff, so two out of the five items I ordered weren't available. I did bring home some duck feet, pork kidney and green tripe.

I'm glad I was able to get some duck feet. I used to use chicken feet when Maya needs some extra bones, but since I stopped feeding chicken, I wasn't able to find anything as a replacement for a while. Maya's poop usually get mushy when I feed her a whole fish and I couldn't do much about it. Yesterday she got some duck feet to go with the fish, and today the poop came out perfect!

As for the green tripe, I got the "Xkaliber" this time instead of the 100% tripe I got last time (both from greentripe.com). The Xkaliber is made of: Green Tripe, Muscle Meat, Heart, Tongue, Trachea, Gullet and Ground Bone. It still smells as bad, but I like the texture better as it has more chunky meat pieces. Since the percentage of tripe is a lower, I'll probably increase the amount I feed and cut out some other boneless meat.

Overall, it's been a good experience. The people there were friendly and it's nice to meet other raw feeders. My only concern is that the products were placed outdoors for a quite a while before pick up. Though kept under the shade, with the hot weather, it could effect the freshness. At least I'll make sure to go pick up as early as I can in the future.

We met another Shiba Inu, Bella, today at the park. Not only she's another long-coat Shiba, she's only a few days younger than Maya. According to the lady who was walking Bella today, her daughter brings the pup here everyday as well. I guess we have very different schedule, so I've never met them before.

This is actually my first time meeting a long-coat Shiba that's not related to Maya.

Sigh, it's another month that went way beyond budget due to vet visits and trying out new supplements.

We got some duck wings, duck gizzards, beef liver, mackerels, and eggs. 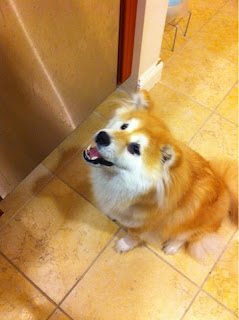 Saw this huge bag of Carlson Morgan Beef Treats at Costco and I just couldn't resist. 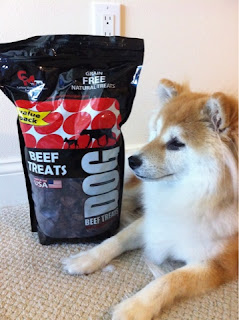 Got a big box of baby wipes from Costco. This should last for a very long time. 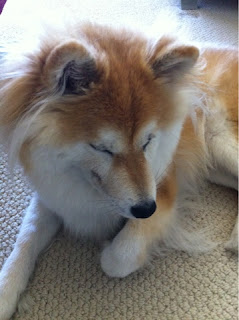 We spent quite a bit on supplements this month because the doctor asked us to try a few different new things. We got a bottle of Nordic Naturals Fist Oil, Standard Process Canine Dermal Support, and Sun Ten Si Wu Tang. If we do need to keep her on those supplements, I should be able to find them online for a much cheaper price.

I also picked up a bottle of local raw honey when I came across a farmers market a few weeks ago. The owner told me I was the third person within the week that came shopping for honey for their dogs.

Most of the cost within this category is for the two vet visits, which were charged by time. The first visit was rather cheap, cause they only charged me for 15 minutes. However, the second visit took much longer. I'll make sure to talk faster and not interrupt the doctor next time... As per the vet's advise, we also bought a box of Claritin from the neighborhood drug store.

I got a Self Cooling Pad for Maya in the attempt to keep her cool. So far I'm pretty satisfied and Maya has been using it a lot. I'll probably write a more detailed review after I get to test it in some more extreme situations. 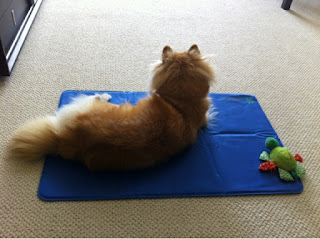