Two years ago, Maya joined our family a week after my birthday. I thought no other present could ever top that. This year, a few days after my birthday, Maya's out of the cone and stopped itching. It's a very different type of joy, but certainly on par with getting a new puppy.

On Friday, I was really worried about the Shiba Inu meetup taking place on Saturday. I was afraid Maya would be scratching every other minute or so, and would just not be fun for any of us. Maya's daddy then came up with the theory that she's only scratching because we were restricting her, and it's a mental issue. We should let her scratch till she's satisfied and she'll get over it. Of course I said no, and dismissed the crazy idea.

Well, he went ahead and took the cone off anyways while I was taking a shower. According to him, it was all bloody and chaotic at the beginning. Maya was scratching like crazy, and he just repeatedly cleaned her up with a baby wipe and kept applying some Vaseline over the wounds. This went on for like ten minutes, and then she decided to stop scratching. Well, I'll be damned. However, we are both glad I wasn't there to witness the ten minutes of craziness, cause I would put that cone back on for sure.

She has been out of the cone ever since, though she still scratches every once in a while and still chews on her feet. It'll probably still take a while for everything to heal up, but at least she's much happier now. Last year, her itchiness stopped around this time as well, but with the help of Atopica, so it's definitely something seasonal. I also have been avoiding our local park in the past few days because they've been fertilizing the grass areas. Not sure if this is a factor or not, but I'll continue to do so for a while to see if it makes any difference. 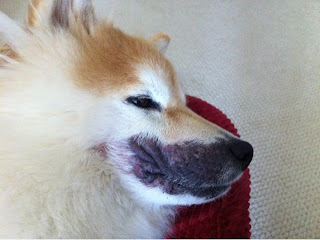 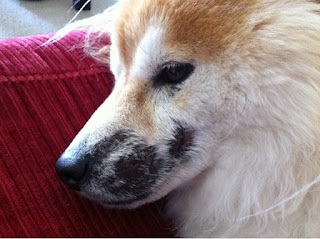 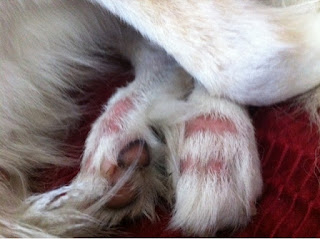 I made a "wish" that if she stops itching by my birthday, I'd donate $200 to a Shiba rescue and be on a vegetarian diet for a full month. Though it's been a bit late, I'll fullfil my promise and start my new diet tomorrow. I also made a further commitment to be on a year-long vegetarian diet starting from my next birthday, if she can remain itch free till then. I will be more than happy to comply.