Three Dogs in the House

Over the past week we've been looking after Caspian, who was adopted about a year ago from a local rescue. We weren't so sure if he'll be okey to be left at home during the day, especially when he's in a new environment, because he had some separation anxiety. However, he did well with Maya when we were out, though he sometimes gets over-excited when we return. He doesn't like car rides much and would get too nervous. I was debating whether to bring him along when I took Maya to see Dr. M. Poor Caspian threw up on his way back. 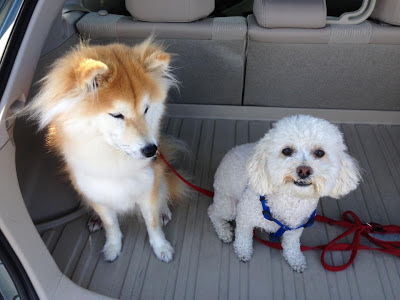 Halfway through Caspian's stay, Tachi joined the pack as well. We were a bit worried, since it's our first time having three dogs in the house, and that Tachi never met Caspian before. We were careful and brought Caspian outdoors to meet with Tachi first when she arrived. After a short walk together Maya joined in, and as soon as they were let off-leash, the three were playing like crazy. Maya and Tachi both know Caspian is smaller, and played much gentler with him than with each other. 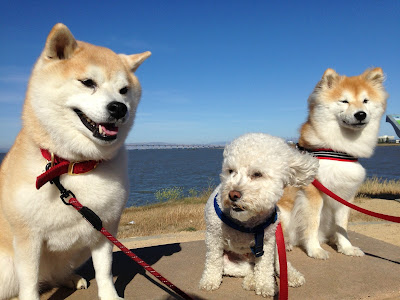 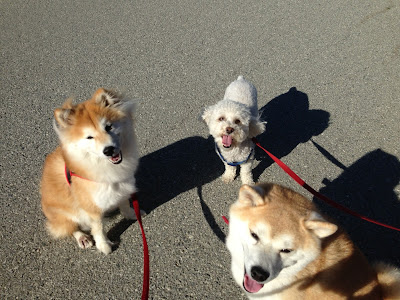 The biggest challenge was to walk the three dogs at the same time, because they have very different potty habit: Tachi likes to stay on the road, and only jumps on to the grass area when she really has to go; Maya likes to sniff around the grass to find the "perfect spot"; while Caspian likes to walk by the bushes so he can keep marking. Imagine me tangled up in 3 leases when they all want to go separate directions. 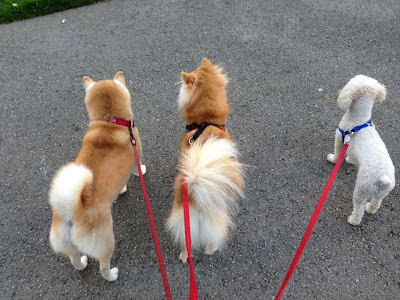