Ever since Maya started on her allergy medicine, Atopica, I've been trying all I can to reduce the dosage. Don't get me wrong, I'm grateful there is something that works to stop the itchiness, I'm just not keen on the idea that she needs to rely on drugs from such an young age. We were able to keep the itchiness at bay when giving her the meds about twice a week, but whenever we pushed it further, it always kind of backfired. She even drew blood a few times due to the insane amount of scratching.

However, with her upset stomach two weeks ago came an interesting side effect. She went through an entire week without taking Atopica and everything seemed fine. The only big change during that time was her diet, which was limited to rice and the Honest Kitchen Zeal. I have always been worried that I might have been feeding her something that's triggering the allergy symptoms, because when I started on raw, she was on full dosage of Atopica, and it might have suppressed the bad reactions. Looks like it could have been the case, and I've been feeding her  something "bad". Though I secretly hoped that she went through some detoxication and pooped out all the allergies, but that's probably not the case.

After she got better, I decided to start a food trial and only feed her Zeal. So far it's been two weeks without the meds and she's doing great! She still scratches here and there every once in a while, but nothing too serious. I'll start adding some meat back to her meals soon, but I'll take it extra slow this time. Since she's already on a balanced diet from a reliable company, I can take my time trying different ingredients. 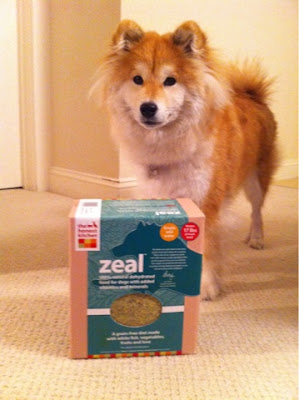 Because I've only been adding Zeal to her meal about a tablespoon per day as a topper before she's sick, a trial size package was enough for us lasts quite a while. After feeding it as a full meal, the last two boxes were gone in days. I'm glad I found a good deal on wag.com and got the package within 24 hours. Just in time before we ran out.

Zeal is the most expensive of THK's product line. It was never my intention to feed her the most pricy product. I was actually trying to be cheap by ordering the product with the most unit price, since all trial packages cost the same. Oh well, you got me THK! At the end of the day, if Zeal is the only thing she can eat, I'm totally fine with feeding her just that. It's a great product and it's still way cheaper than the pills and vet visits.
The real tricky part about the food trial is the treats. Since we are taking agility classes, I really need to give her a few different treats for training. I was giving her cheese with her meals while she was sick, so I continued to use it as treats. I also gave her some Zuke's Mini Naturals and Cloud Star Buddy Biscuits during our class last Saturday, but I'll probably cut those out since she's been scratching a bit over the weekend. ZiwiPeak Cuisine, though pricy, seems appealing. I can probably skip a meal on Saturdays and just feed it to her during class instead.

Anyhow, I'm thrilled by the progress so far and really glad to be able to start a trial with a clean slate. It'll be wonderful if she can stop taking the pills for good!