Maya has never been a toy motivated dog. She enjoys playing tug with us, but rarely does so outdoors when there are much more interesting things going on. It wasn't really a problem till we started to take agility classes. Lots of the training could be done much easier if the dog is toy motivated, such as throwing the toy to a target location. Using a toy as reward is also good for keeping the drive high, as food usually slows them down.

When asked about this issue, the trainer kind of suggested us to use a toy that can hold treats, so the dog can smell it and be more interested. With this in mind, I went to a local pet shop to search for one, but was only able to find a toy that has a small pocket for a plastic bottle. I removed the bottle and put in some jerky and tested at home with Maya. She seemed interested for a while, but once she knows she can't get the treats out, it kind of became just another toy. It was even worse at the agility class. She didn't even attempt to touch the toy, making me like a fool playing with it myself.

After this toy failure, I started to a bit more research online and came across this video. (The whole series is pretty worth watching).

I tried shopping around online for the toy shown in the video, but all the ones I found are really expensive, like this and this.

As I was debating whether I should bite the bullet and just get one, the idea came to me that maybe I can make one myself and decided to give it a try. The entire project took me only about two hours and I'm quite happy with the result. (Please note that I haven't touched a needle in years, so it's probably even easier.) Here's what I did.

Step 1: Look for existing items at home that I could make use of. I found a travel water bowl that was given to us by the breeder and a rope toy Maya rarely plays with. 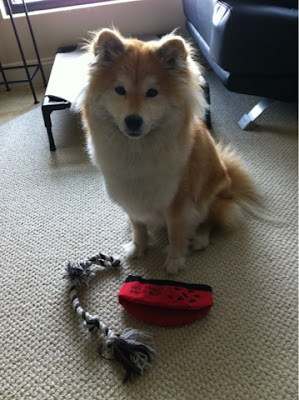 Step 2: I attached some Velcro sticky tape to the edge of the bowl, so that it can stick together when folded in half. I was planning to stich the tape to the bowl, but the fabric is super thick and I wasn't able to punch the needle through. Luckily, the tape itself seemed to stick quite well to the fabric, so I just left it like that. 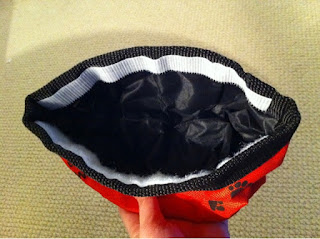 Step 3: I realized the pocket is a bit too deep, so I sewed in some of the inner fabric and made it smaller. 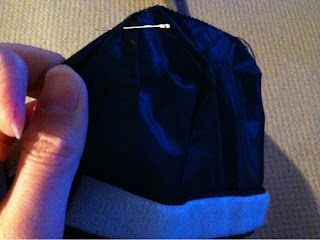 Step 4: Removed the bottom part of the bowl. I should have done it earlier, which would have made my step 3 much easier, but at that point I wasn't sure if I should keep it or not. 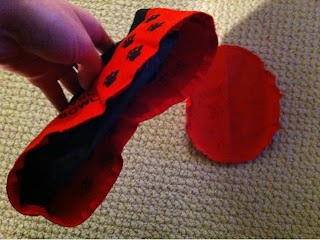 Step 5: Sew in the rope. And here's the final product: 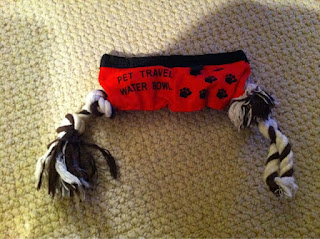 With food in the pocket: 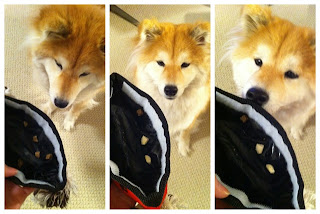 So far, I'm happy with Maya's response to the toy. I let her watch me put treats in the pocket and play with it by myself for a short moment. Then I lowered the toy and lured her to play with me. After tugging for a few seconds, I gave her a "drop it" commend, and as soon as she dropped the toy, I opened up the pocket and let her eat the treat. After a few rounds of that, I threw the toy around and played fetch. Every time she brings the toy back to me, I'll open it up and treat. Since I'm still "charging it up", I made it easy for her to get the goodies. I also kept the sessions short and put the toy away when done. I want to keep it interesting and only use it during training. (Sorry, blurry cell phone pictures, but now I have a few dollars more in my camera funding!)


The only thing I don't like about the toy is the ugly "Pet Travel Water Bowl" text on it, but it might come off after a few rounds of tugs anyways. I'm also kind of worried if it's sturdy enough, but I guess I can always sew it back up when it breaks. I'll probably have to wash it quite often, cause Maya sure drooled all over and in it. Since it used to be a water bowl, the inner fabric is water resistant, which makes it easy for me to wipe clean after each use. From the way I sewed the pocket, I kind of accidentally made two pockets instead of one, which actually turned out to be nice. I can put a bunch of treats in one side and move a few over to the other to treat Maya each time. This way I don't need to refill that often.

Hopefully, this new toy can help make Maya more toy motivated. We'll see how it goes in the next class.
at 11:54 AM
Email ThisBlogThis!Share to TwitterShare to FacebookShare to Pinterest
Labels: Agility, DIY, Toys